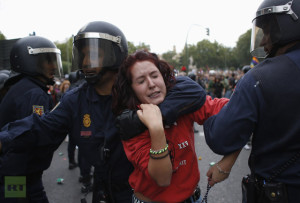 A protester is dragged away by a police officer after the police charged demonstrators outside Spanish parliament in Madrid, September 25, 2012. Protesters clashed with police in Spain’s capital on Tuesday as the government prepares a new round of unpopular austerity measures for the 2013 budget that will be announced on Thursday. REUTERS/Susana Vera (SPAIN – Tags: CIVIL UNREST POLITICS)